Last month, I had the opportunity to participate in a “write-in” as part of the New West Festival of Words 2018. Having never taken part in a write-in before, I admit I wasn’t sure what to expect. Would it just be three hours of writing time? Would it just journalling?

As it turns out, it was an elaborate challenge to my writing process.

As I got there early, I watched the other nine arrive. I waited with my backpack at my feet, wanting to gauge the crowd before I reacted. Would this be a group of young, laptop wielding sycophants or a group of aging hippies here to talk about their memoirs? Or something a little in-between? Or all of the above?

I watched everyone arrive and warily unload their writing tools. Of the first few to arrive, there were several notebooks, of various types, one laptop, and one iPad. I sighed with relief and withdrew my notebook and two pens. (I always have two pens. It’s anxiety thing. What if one runs out? I can barely handle it if someone asks to borrow one of them.)

This was something of a relief to me, because I too am a many-notebooked individual. Emboldened, I immediately pulled out my pencil case, my other notebook, and my pad of lined paper. Different notebooks for different things.

With the ice now broken, we all started chatting and quickly realized that none of us really knew what to expect. So we ventured forth with open minds. And I believe we each got something different out of it. Some of us, perhaps, more than others.

The facilitator guided us through a series of exercises, beginning with brainstorming words to loosen our “wordhoard,” as she called it, quoting Beowulf.  From there, we moved through a series of exercises, from writing one or two lines describing different mothers we knew through to selecting a postcard from a stack and filling out the back, from one fictional person to the next.

Some exercises were more valuable to me than others and I imagine if you had each of us ten participants pick our most and least favourite one, you’d have ten different answers. I’m sure, as well, that many others found this whole session extremely valuable, while others found it hardly worth their Saturday morning.

I guess it all depends on how you work as a writer. Some, who had barely given writing a thought before this, might have been a little confused. Others who had been working their way through a first draft of a single project for seemingly years might have found it priceless. Who’s to say?

For me, who seems to take for granted how easy it is to bash out a first draft, it was a fun exercise, but not much more than that. I met some amazing people–possibly the beginnings of a new writing circle–and got to flex a few rarely flexed muscles.

But there remained something about the process that sat poorly with me and it took me a long time afterwards to really figure out what. I had to pour over my memory of the day and pick out exactly what it was that caught me up.

But I did figure it out. Despite the diversity of different prompts and exercises, they all boiled down to this same structure. The facilitator gave us a prompt. We wrote. We reconvened. Read what we just wrote aloud. Gave each other feedback.

This was beyond nerve-wracking to me. It felt wrong. It  doesn’t match my process in the slightest. A first draft, to me, is figuring out what it is I want to write. Then I go over it, cut it down, rearrange it, smooth over the language and style. I do this a lot before it is even close to something I want someone else to read.

I am certain the structure the facilitator used works for some; it does not work for me. The idea of making each word perfect enough to share with the class (so to speak) right off the bat is the type of mindset that leads to writer’s block. It is far too much pressure and the easiest way for the mind to deal with that is to simply not write.

This is what writer’s block really is: It’s not that the words won’t come; it’s that you’re afraid that those words won’t be good.

And of course that is perfectly understandable when you feel like your first draft is the one you have to share. It’s not a mindset so much as it’s a mental vice.

This is was one of the most important things I ever learned as a writer.

It is only when you let go of the need to be good that you can actually get the real work done.

I think of the people I have met in groups like this write-in. So many of them have spent so long writing their One Big Thing, and in all that time, they’ve just been working on the first draft. But I believe that you have to accept that no matter what you do or how long you spend on it, your first draft will be terrible.

The question is, what do you want to be terrible about it? Do you want it to be something you can easily fix or something huge that requires practically starting over?

Too many people focus on the style that they forget the substance.

So here’s the thing: the reader does not care about every little word.

The reader cares about believable characters, effective world-building, sensible plots, and appropriate pacing. These are the things you lose track of when you focus on making the first draft perfect enough to read to others.

Instead of thinking that the goal of your first draft is to have something you can share with people, think of it this way: The goal of the first draft is just to tell yourself the story. Only you will ever read this.

The goal of the the second, third, and sometimes even fourth drafts are to make sure you have believable characters, effective world-building, sensible plots, and appropriate pacing.

It’s only the final draft–the one you’ll put out there to readers–where every little word even comes close to mattering. Even then, it’s a wordhoard that no one will look too closely at. You’re off the hook.

So start just by telling yourself your story. No one else. Then see where that takes you. 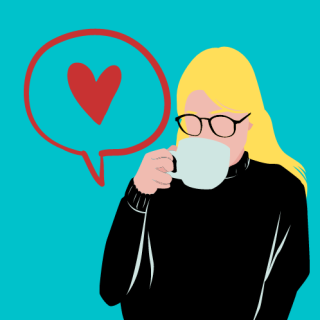