The pleasure is mine to announce – imaginary megaphone in hand – that I have a piece published in the most recent issue of Sassafras Literary Magazine.

In their sixth issue, Sassafras, have gathered an excellent collection of other short works of art, poetry, fiction and non-fiction that I am proud to be in the company of. They are all far too talented to end sentences with prepositions, as I have just done. 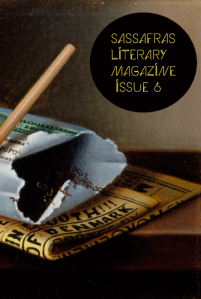 The piece is the first page of a novel that I completed a first draft on almost two years ago and have left to quietly simmer in the distance ever since.

Coal Dust is narrated by a recently deceased teenager, Jamie. But it is not a fantasy. Jamie is not in heaven, is not a ghost, is not anything of the sort. He is simply dead. This is also not Jamie’s story. It is the story of Jamie’s two half-siblings, Caroline and Stuart (step-siblings to each other), and how they struggle to redefine themselves after the death of the one person who might have made them a family.

Jamie as narrator began as an experiment. Is it possible to have a narrator simultaneously omniscient and first person? I think it turned out quite well, but as a writer, I have that horrible affliction where I am completely unable to be objective.

Alas, I ramble. Such is my right and my shame.

Please do not judge Sassafras because of my arrogance. They are awesome.