After some downtime in the first half of this year (during which I moved house, settled down, watched a lot of Community, basked in the glow of a new relationship, and forgot about life for a while), I haven’t really written much. It’s strange how quickly six months can pass.

Am I finally experiencing that horrid trick of the mind they always warned me about? The one where time speeds up and the years whizz by like the landscape outside when you fall asleep on the train?

Anyway, I really should have spent the first half of 2012 sending queries to agents and such. You know, actually doing something with all these words I spent 2011 writing.

But… ugh…. well…. The procrastination is hard to describe. 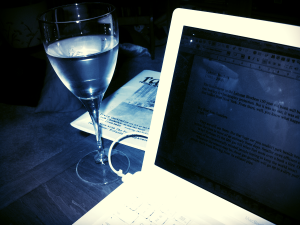 I would spend hours upon hours agonizing over a sentence. Days upon days crafting chapters. I can’t begin to fathom how much time and stress and glee went into creating over three hundred pages (135,000 artfully chosen words), and then following it up with yet another nearly two hundred pages (73,000 more artfully chosen words) in an entirely different genre.  Yet when it comes to crafting a one-page letter that is somehow supposed to summarize all this glory, I come up short.

It’s the worst writer’s block ever. Writing a query letter is beyond that horrible analogy to pulling teeth. It’s like pulling your own teeth… with a dull letter opener jammed into your gums, trying to pop the suckers out like those pebbles that used to stick in the soles of your Keds when you were eight years old.

Yet, alas, I have a dental plan now. I am a grown-up. This means I should be able to handle a mere query letter. My dreams of locking myself in a dark room all day every day, jamming away at keyboard to craft the world of fictional people, will not happen on their own.

But if anyone wants to help, please do. PLEASE. DO. If someone wants to tie that metaphorical string around my tooth and slam the goddamned door, then please, be my honoured guest.

So now having resigned myself to this torture, I’ve started writing again. As if this somehow lessens the pain.

When dedicated to one project, I keep notes of other story ideas I get that I will want to work on at a later date. In 2011, I amassed quite a collection of stories that will be FREAKIN’ AWESOME once I get around to writing them. I did spend some time these last few months going over these notes, waiting for one of these ideas to take hold of my brain and not let go, like some kind of badly trained dog. Something needs to grab me so tightly that I can’t let go before I can dedicate months and months to its creation.

So what grabbed hold?

Not the existential ponderings of youth confronting death, nor my buddy road comedy, nor my genre-bending love story, nor my time-travel film noir. Nope. Niet. Nothing.