The spy for the 21st century was not James Bond, but Jason Bourne. The grittiness, global perspective, and moral quandaries of the Bourne triology (The Bourne Identity, The Bourne Supremacy, and The Bourne Ultimatum) instantly rendered James Bond moot. In following with the general post-9/11 trends, the Bourne films did not present the now-outdated black and white world of evil master criminals with the unquestioning moral righteousness of the government agents, but rather a corruption-from-within trope that proved much more relevant. A refashioned reboot, starring new 007, Daniel Craig, went back to the beginning with Casino Royale, and was a direct response to the success of the Bourne films.

Post-Tarantino to the CSI Effect

Although the “Post-Tarantino” age definitely began in the late nineties, the first decade of the millennium saw the further proliferation of Quentin Tarantino’s hallmarks – multiple characters with intersecting storylines, the beauty of violence, the injection of irreverent pop-culture referencing humour – to the point where they are now a standard. Arguably Guy Ritchie’s most popular film this side of the Atlantic, Snatch, struck a particular chord, filtering a Tarantino flash through a British sensibility. The “Age of Jason Statham” left in the wake only further branched out from here: The Transporter (and its sequels), Crank, Death Race, and so on.

This decade also saw Martin Scorsese win his first Oscar for The Departed, a remake of the Japanese film Infernal Affairs, which only came out four years previous in 2002. With Scorsese a common benchmark for crime films in Hollywood, The Departed, with a few traditional trappings of a gangster film, namely in its character archetypes, remains Scorsese’s most untraditional gangster film, with its unpredictable plot and Boston setting. 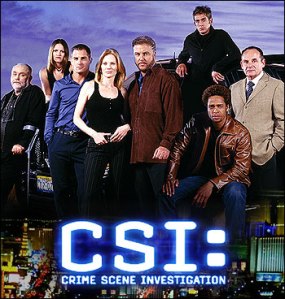 In the last ten years, we saw differing approaches to the deconstruction of crime, from the study of the criminal, such as the true-story Monster, to the crime-as-satire, such as American Psycho. On television, crime was perhaps most literally deconstructed (albeit within the confines of the strict formula of the crime procedural) in the runaway success of CSI: Crime Scene Investigation (following-up an acronym with the acronym spelled out has always seemed rather redundant) and its many copycats. The graphic nature of the show, its grittiness, and lack of many “private life” storylines helped set the dark, green-filtered tone of the 2000s. Although on the wane, the genre is becoming more self-reflexive, especially with shows like Dexter turning the tables on the police versus killer dynamic (as the killer is one of the cops, natch) – a further re-evaluation of the Us versus Them value judgments in the post-9/11 era.

The remakes of Ocean’s Eleven – with their fairly PG nostalgic appeal of a happy-go-lucky criminal is definitely antithetical to the otherwise gritty realism of the decade’s crime films. This anomalous feel-good heist comedy (not to mention its even more outlandish sequels) stands apart from the rest of the decade in the same way Star Trek does, implying that remakes and reboots should follow one of two approaches: a) darker, moodier and grittier, or b) fun and frolicking with a sense of irony – but way, way, way cooler than the original.

Re: The Franchise, Retread / Remake / Reboot

Where to start on franchises, retreads, remakes and reboots? Any attempt to fully exorcise the extent of recycled material that appeared this decade would be the metaphorical equivalent of summarizing Shakespeare’s entire canon in “the play’s the thing.” In a fit of futility, I’ll be brief. Superheroes movies existed before this decade, as did sequels and franchises – but their complete and utter cultural saturation has taken itself to the extreme, where sequels and franchise spin-offs are expected, rather than a treat for the lucky audience. Too many bad remakes or sequels, such as Indiana Jones and the Kingdom of the Crystal Skull or X-Men Origins: Wolverine, seem to have left a poor taste in many mouths, yet studios still think in terms of franchise opportunities before they even greenlight the first film, as is evident with the immediate announcement of an Iron Man 2, a second Star Trek, and the set-up for at least one more Sherlock Holmes.

In literary adaptations like Harry Potter to almost every superhero film, the pre- and post-9/11/Iraq War transition is most evident. Harry Potter started in 2001 as a fantasy family story of good versus evil, and quickly became a dark, seething exploration of morality and identity. It would be hard to imagine Chris Columbus turning the central theme of Harry Potter and the Philosopher’s Stone into Harry’s identification with his shadow self that we see in David Yates’s Harry Potter and the Order of the Phoenix. Likewise, we saw the decade’s new explosion of superhero movies go from the campy fun of Sam Raimi’s Spiderman to the dark psychosis of Christopher Nolan’s The Dark Knight – a perfect microsm of the story arch of the Noughties as a whole.